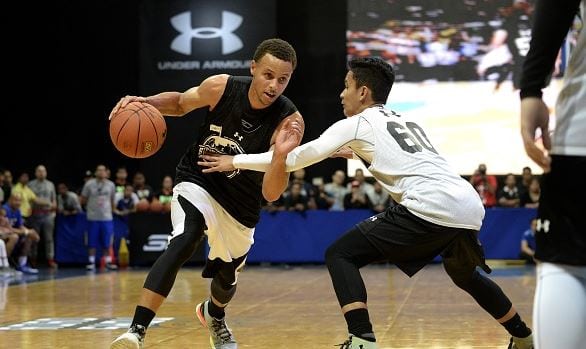 The only award (bar Rookie of the Year) that has never been won by a player twice so far looks like it’s going to CJ McCollum of the Portland Trail Blazers.

The third-year man has so far upped his scoring from seven points per game to 22, while even managing to up his shooting percentage from .436 to .472 and his three-point percentage from .396 to .462.

Sparingly used in his first two seasons, the boy from Ohio is showing what Portland saw in him in 2013 when they picked him 10th overall, and his is finally repaying the faith.

While he will have to maintain these lofty averages over the course of the year, The Trail Blazers so far look justified in their decision to let Wesley Matthews move during the off-season.

Right now, it looks like almost no-one can take this award off Stephen Curry.

The Golden State guard and reigning MVP could also qualify for the previous award, starting his year out averaging 35.5ppg on 57% field goal shooting and 51.5% three-point shooting. Simply unheard of stuff.

But if anyone is going to take this award off Curry, it could be Clippers big man Blake Griffin.

This season, Griffin’s scoring, typically noted as his best facet, has gone to even higher levels, having started out the season averaging 28 points per game on almost 60% shooting.

His form has had a big impact on his Clippers, as they have started the season 4-1, losing only to Curry’s Warriors.

Last year, the Atlanta Hawks were in the hunt to come out of the Eastern Conference. They made it all the way to the Conference Finals and were swept aside by the much more experienced Cleveland Cavaliers.

This year, they return far more experienced and battle-hardened, and through the first week and a half of proceedings, it has shown.

On opening day, they lost at home to the much-improved Detroit Pistons.

Since then, they have gone 6-0, including 4-0 on the road, and so far look like the only other challenger from the East other than Cleveland to make a run at the title.

Time will tell whether they have the cattle or not to last a full season at this break-neck pace they have set, but for now, they look like good money to at least match their efforts from last year.