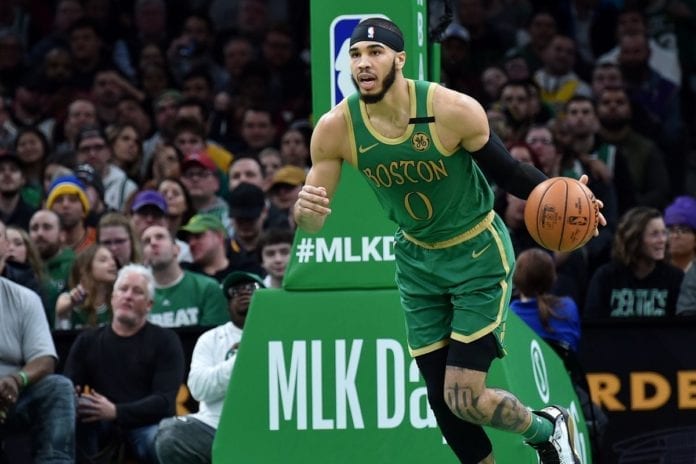 Throughout NBA history, there has been a certain point in a players career where the ascent from good player to all-time player begins. This is known colloquially throughout the NBA as 'The Leap'.

The latest name to be added to that list is Boston Celtics forward Jayson Tatum. Tatum has increased his scoring output from 15.7 ppg to 22.9 ppg this season while becoming the Celtics' first option on offence, ahead of off-season signing Kemba Walker (21.8 ppg).

In the three games since the All-star break, where the 21-year-old as selected for his first appearance, he has shown the killer instinct and scoring ability that first captured peoples' eyes during the 2018 Eastern Conference Finals against Lebron James' Cleveland Cavaliers.

With fellow All-Star Kemba Walker missing due to injury, Tatum has scored 39 points and 28 points in wins over the LA Clippers and Minnesota Timberwolves while scoring 41 points in an overtime loss against the LA Lakers.

That game against the Lakers, being played to a national audience, allowed the world to witness Tatum rising to the occasion and at times out-dueling Lebron James before the Lakers were able to use their veteran experience to close out the game at home.

The advanced metrics are also painting a great picture for Tatum, with his PER increasing from 15.1 to 20.0 despite having his usage rate increase from 22.1% to 28.2%.

Tatum's improvement will have to continue for Boston, who currently sit second in a tight Atlantic Division, 2.5 games behind leader Toronto and 4.5 games ahead of third-place Philadelphia. At 39-17, Boston are currently third in the Eastern Conference.

No matter how this season goes for Boston, with Kemba Walker in his prime and an improving Jaylen Brown leading a solid core, Celtics fans should be excited that all signs point to Jayson Tatum starting to enter the rarefied air of great players and potentially raising another banner at Boston Garden.