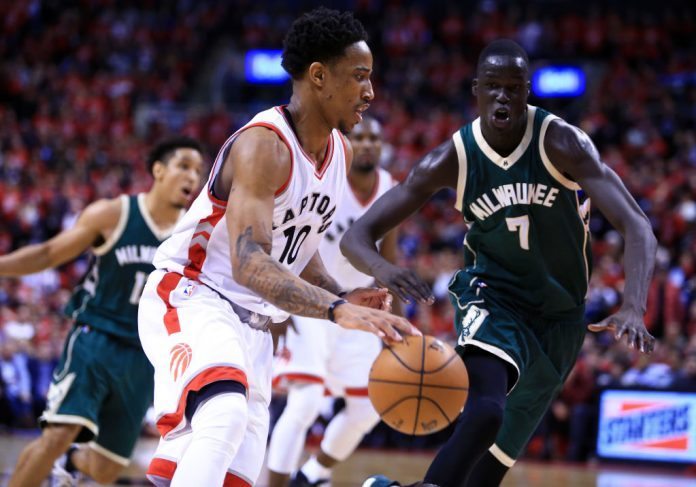 Day three of the NBA playoffs and there has been no shortage of enthralling action thus far.

After dropping game one at home, Toronto bounced back to level their series with Milwaukee with a 106-100 win.

Kyle Lowry's dagger with 8.9 seconds to go sealed the result for the Raptors as he and DeMar DeRozan combined for 45 points on 50% shooting for the home side.

Serge Ibaka chipped in with 16 points, seven rebounds and six assists as his playoff experience came to the fore.

Aussies Thon Maker and Matthew Dellavedova played crucial minutes down the stretch with 'Delly' missing a wide open three that would have given the Bucks the lead with under a minute remaining.

He finished with seven points (3-10 FG) and three rebounds while Maker had five points, four assists, three rebounds, two blocks and a steal.

Meanwhile in Boston, the Chicago Bulls have come away with a stunning 2-0 lead as the series shifts to The Windy City.

The Bulls are the second eight seed ever to take the first two games from a one seed in the first round, joining the 1993 Lakers vs. the Suns.

Rajon Rondo, playing just his fourth playoff game since leaving Boston in 2014, fell just one rebound shy of a triple double as he finished with 11 points, 14 assists, nine rebounds and five steals in the victory.

Fellow veteran Dwyane Wade dropped 22 points on 9-16 shooting as Jimmy Butler also had 22 points to go along with eight assists, eight rebounds, four steals and two blocks as the Bulls controlled the contest from start to finish.

Celtics superstar Isaiah Thomas failed to find his offensive groove as he struggled on the night with 20 points on 6-15 shooting. It was a poor shooting night for the Celtics as a team, shooting just 30% from three-point range as the Bulls made the same amount of long balls (10) from eight less shots.

In Los Angeles, the Clippers tied their series with the Utah Jazz following a 99-91 win at Staples Center.

The Clippers led from start to finish as their 'Big three' came out to play with Chris Paul leading the way with 21 points, 10 assists and three steals. DeAndre Jordan had 18 points and 15 rebounds as the Clippers dominated the paint with Jazz big man out with a knee injury suffered in game one while Blake Griffin had 24 points and five rebounds as the series shifts to Salt Lake City.

While the Jazz's three point shooting kept them in the contest, they failed to find a constant offensive spark despite having five players have 10 points or more.