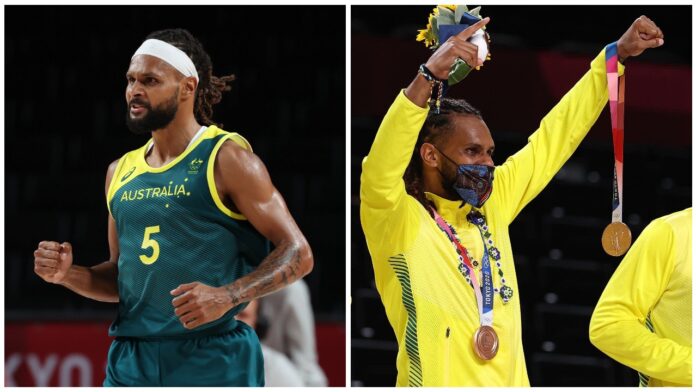 The Boomers have finally secured a place on the Olympic podium after beating Slovenia in the Bronze Medal match.

Inspired by an incredible 40 points from Patty Mills, the Boomers held off a late Luka Doncic charge to reach the podium for the first time in their 65-year history.

A massive congratulations to the Boomers!!! You led from the front, @Patty_Mills, and you and the team made us all so proud! #Tokyo2020 pic.twitter.com/5Gfw6PFH3v

The Boomers were the better team for most of the game but the nerves started to set in at the start of the last quarter when then Europeans started to take hold of the game.

However, a silly un-sportsman like foul on Mills allowed the Boomers to settle the speed of the game and get the last quarter back on their terms.

The breakthrough medal is a landmark moment in the history of Australian basketball. The enormity of the moment wasn't lost on Australia's co-flag bearer who reflected on the achievement post game.

"We've been waiting for this moment for a long time," an emotional Mills said.

"I don't know whether to cry, laugh, smile, a lot of emotions."

"It's taken a lot of ups, a lot of downs for us to get over the hump. It's our culture at the end of the day, it's our Australian culture, our Aussie spirit. It's the boys being able to hang together and understanding the meaning of what it means to represent your country.

The new Brooklyn Nets guard said that the standard of what the Boomers can achiece has now been lifted with this medal and that they won't accept anything less.

"Now that we have made it over the hill, this is the standard now of Australian basketball for men and we take nothing less," Mills stated.

"We say that 'gold vibes only' is the standard and we don't accept anything less from on the court, off the court.

"I don't know whether to cry, laugh or smile."

"Where we've built our Boomers culture is the lay of the land that goes far beyond basketball.

"Where we've been able to build our Boomers culture from is being able to understand where we've come from, where we see the future, living in the present and who we represent. Our names are 'Boomers' for a reason."

Boomers legend Andrew Gaze was very emotional when reflecting on what this group had achieved. Gaze and his father have played an incredible role in Australian basketball for decades and the moment was all too much for the former San Antonio Spur.

"When you see that resilience being rewarded in this way, and it hasn't been for a long, long period of time. For me, selfishly, I feel a part of it," Gaze said, choking back tears.

🗣 "It's all about getting on that podium and showing the friendship and love. Making sure you do the right thing by the game and the nation and the pride that comes with pulling on a green and gold jersey."@AndrewGaze10 captures the mood of a nation 😭#Tokyo2020 | #7Olympics pic.twitter.com/rREgY9w7ky

"It's all about getting on that podium and showing the friendship and love.

"Making sure you do the right thing by the game and the nation and the pride that comes with pulling on a green and gold jersey."

With some of the stars of this Boomers team unlikely to make it to Paris in 2024, there was a sense of desperation that came with the Australian's.

The likes of Mills and Joe Ingles will most likely have stepped away from the Boomers fold by then or at least play a much smaller role. It was fitting that they got their medal.

While it may not have been the gold that they had aimed for, an argument could be made that they were the second-best team in the tournament and maybe were dealt a harsh hand when drawing Team USA in the semi-finals.

It’s not what they came for. And it could be argued they were the second best team in the tournament. But at the end of the day the Boomers will take 🥉. #Olympics #Tokyo2020

The Boomers united a nation in a very tough and trying time and will now forever hold a place in Olympic history and folklore.