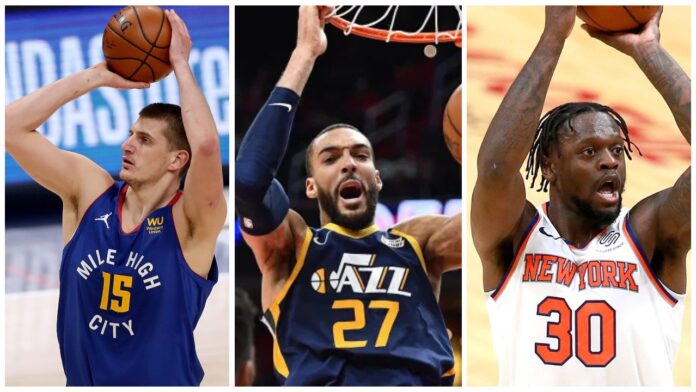 The 2020-2021 NBA season has been an eventful one, with the COVID-19 pandemic still playing a prominent role.

However, the players have still been able to display top-end talent, highlighted by these season awards below:

The big Serbian was a force to be reckoned with this season, averaging 26.4 points, 10.8 rebounds and 8.3 assists per game, whilst leading the Denver Nuggets to the three seed in the Western Conference with a 47-25 win-loss record.

'The Joker' became the first centre to win the league MVP since Shaquille O'Neal in 2000, earning 91 first place votes out of a possible 100, with Joel Embiid and Stephen Curry being his biggest competitors for the award.

“This trophy is not mine. It’s all of these guys over here, so I wanted [you to cheer] for them.” pic.twitter.com/u4HpnkqSFH

The Utah Jazz centre is the ultimate rim-protector, averaging a league-high 2.7 blocks per game.

The Utah Jazz surprised Rudy Gobert with the DPOY trophy 🙏

The Utah Jazz guard provided immediate impact off the bench, averaging a career-high 18.4 points, 4.0 rebounds and 2.5 assists in 26.7 minutes in 68 games (one start).

Clarkson's scoring average of 18.4 points as a reserve was the highest in the NBA.

this rules. Inside the NBA crew and his teammate Joe Ingles surprise Jordan Clarkson that he won 6th Man of the Year award. pic.twitter.com/Kfcac862pC

The New York Knicks forward enjoyed a breakout year, leading the Gardeners to the four seed in the Eastern Conference, and in doing so, breaking a seven-season playoff drought for the often mocked franchise.

The braided Randle averaged 24.1 points, 10.2 rebounds and 6.0 assists in an NBA-high 37.6 minutes in 71 games. He also set career highs for averages in points and assists and matched his career high in rebounds, ranking in the top 20 in the NBA in all three categories.

Randle received 98 first-place votes out of a possible 100, and was a clear winner for the Most Improved Player award this season.

Coach of the Year - Tom Thibodeau

The head coach of the New York Knicks enjoyed a successful season taking his third franchise to the playoffs for the first time since 2013.

Thibodeau took over the Knicks this season, and turned a 21-45 record last season into a 41-31 record this season which is a remarkable turnaround for one of the biggest franchises in the NBA.

This is the second time Thibodeau has won Coach of the Year award, after initially winning the prize whilst leading the Chicago Bulls in the 2010-11 season.

Rookie of the Year - LaMelo Ball

The playmaker may have honed his skills 'down under' with the Illawarra Hawks, but his form for the Hornets this season was, at times, 'out of this world'.

Across his 51-game debut year, the right-handed point guard averaged 15.7 points, 5.9 boards and an eye-catching 6.1 assists per appearance.

The third son of the outspoken LaVar took home the award over the highly-fancied Minnesota shooting guard, Anthony Edwards.

With the vast majority of his career still ahead of him, hoops fans can look forward to many more dimes like this from the precocious Californian.

This LaMelo Ball assist was too smooth 🔥 pic.twitter.com/dYIj1JdAbg